From lakes to mountains

Walking path through the pastoral landscape of Jura with superb views throughout the route, the trail is completely marked by more than 100 cairns built along the path.

It borrows old passages of cattle grazing the few small spaces among the rocky landscape which borders la Chaux upstream of the village.

A first place allows a moment of relaxation under a "task" of "foyards"(european beech), the trail then leads to a first belvedere with a bench of rest and contemplation, then a second, more widely open to an exceptional panorama (with a small platform and a solid wood bench).

Contemplate the range of the Monts Jura from the Mont Rond at the end of the Grand Crêt d'eau with the Crêt de la neige, the highest point of the Jura Massif and the Crêt de Chalam  in the background.

Then the massifs of Dôle, Noirmont, Risoux, Risol reveal the Alps and Mont Blanc. Then the view is on Chatelblanc, Mount Suchet in Switzerland, Mont Dore in Métabief and further north, the gap of Chalesmes. The imposing Massif of the Pic de l'Aigle appears just opposite with the lake of Ilay and the village of Frasnois below. Far off the Mont Rivel (Champagnole) the wind turbines of Chamolle all recent, the coast of the Heute ...

Any question or booking inquiry ?

How to get here ?
A question? Contact the tourist office! 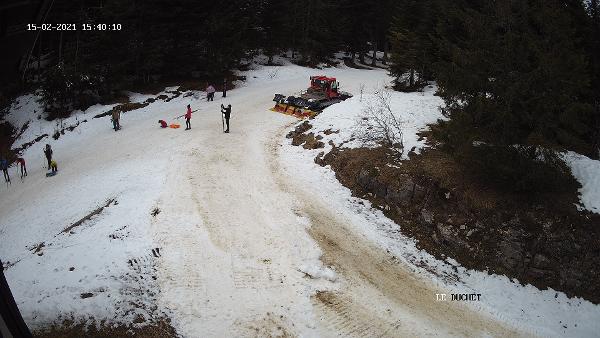